Male hair loss is a very common condition that affects 6.5 million men in the UK. It not only impacts physical appearance but can also impact your self esteem and mental health. Yet despite this, just 11% of men visit a professional when they first start experiencing hair loss according to our new 'UK male hair loss report'.

In order to investigate how men in the UK are navigating their hair loss journeys, we've surveyed 1503 Brits who use dating apps. Just over 500 of them are men experiencing hair loss and the other 1000 said they were attracted to men. We asked them about the impact hair loss has on their personal lives and what they do to try, if anything, to treat their hair loss.

How do men feel about their hair loss?

According to our survey, when men first start experiencing hair loss, almost half feel self-conscious or stressed and around 36% feel worried

And while hair loss affects one in two men over 50, it can also affect those of much younger age. It’s therefore no surprise to see 44% of those aged 16-24 feeling worried about their hair loss and 47% of those aged 25-34 feeling stressed over any other emotion.

However, this is not the case for most, as sadly almost half (44%) admit to still feeling self-conscious about their hair loss, more than a third feel unattractive (35%) and almost a third (32%) feel unhappy.

The reason why men feel self-conscious about their hair loss could be due to the fact that 89% of those experiencing the condition believe there is a negative stigma towards it, according to the survey.

However, 13% of respondents who are attracted to men state they are most attracted to a bald hairstyle over any other men’s hairstyle. That includes well-loved cuts such as the fade and the 80s throwback, the mullet, which is having a comeback thanks to the popular series Stranger Things.

In fact, of the men attracted to men that we surveyed, one in four said a bald hairstyle was the most attractive look to them. And men aged 35-54 were the most likely to find this hairstyle attractive.

What are the first actions men take when they notice they are experiencing hair loss?

The first signs of hair loss can be a huge concern, with feelings of worry and stress taking their toll on men’s mental health. However, there is a wide range of treatments available that they can access to treat their hair loss. So, what actions do men take when they first start experiencing hair loss? 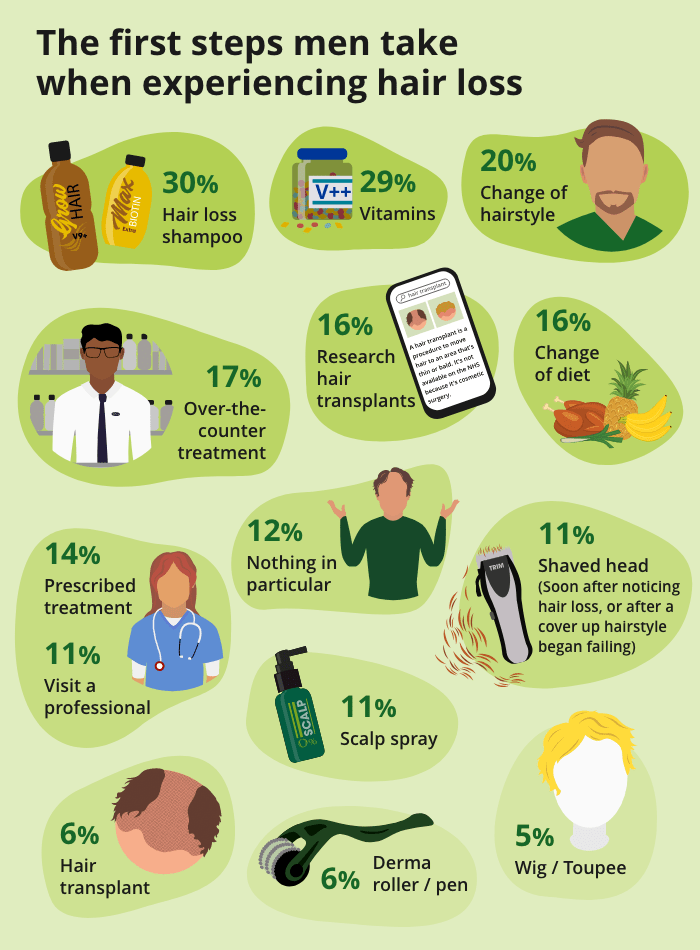 Those aged over 55 were also more likely to do nothing about it, with 29% of men not trying anything for their hair loss.

This could be due to those aged 55 and over being the most likely to think there is not a negative stigma around hair loss, with 20% stating this compared to just 7% of those aged 16–54.

When it comes to medical treatment, just 11% of men visit a clinic or a professional when they first notice their hair falling out. Those aged 25-34 are the most likely to visit a professional, with 13% admitting this was their first step.

17% of men try an over-the-counter hair loss treatment such as minoxidil (a daily hair treatment). The younger generations were more open to trying this treatment with 21% of 16-24 year olds giving it a try and 20% of those aged 25-34.

Almost one in six (14%) opted for a prescription hair loss treatment such as Finasteride as their first port of call.

Only 11% of those experiencing hair loss choose to embrace it and shave all their hair off after first noticing they are losing hair. And those aged 45-54 are much more likely to shave their hair off as a first choice. 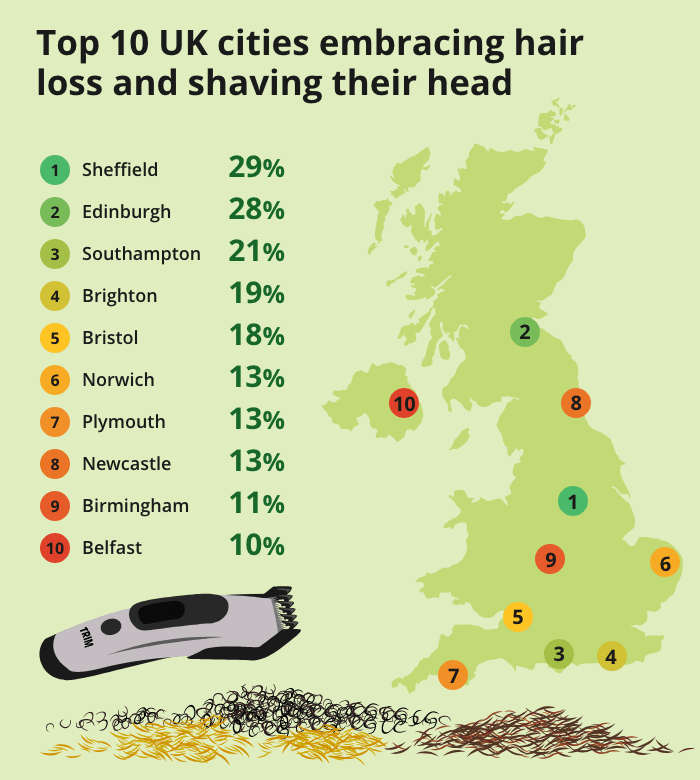 We also looked at how people deal with hair loss differently across the country. Those experiencing hair loss in Sheffield are most likely to embrace their hair loss and shave off their hair with almost 29% saying they did this. Edinburgh follows behind with 28% and Southampton in third with 21%.

Dr Sameer Sanghvi from our team explains what treatments are available to males experiencing hair loss:

"As male pattern baldness is usually caused by genetics, it’s not a shock to see 12% of respondents saying they felt betrayed by their bodies when they experienced hair loss. Hair loss happens when hair follicles on the head convert the male hormone testosterone into another hormone called dihydrotestosterone (DHT).

"However, there are effective over-the-counter and prescription medications available that can help stimulate hair regrowth and slow down the process.

"It’s important to treat hair loss at the first stages of noticing it, as it’s a lot easier to prevent hair from falling out than it is to encourage regrowth. If you stop using the treatment, the hair loss will resume.

"The most common proven effective treatments available are once-a-day daily tablets known as Finasteride (sometimes known by the brand Propecia) which works by blocking DHT, stopping the hormone from attacking hair follicles. There’s also a treatment called minoxidil, which comes in the form of a foam or lotion. It works by increasing the flow of blood and nutrients to the hair follicles, which can help stimulate new, healthier hair growth.

“The success of hair loss treatments depends on lots of factors. If you’re using Finasteride, for example, up to 90% of men see an improvement in their hair loss, with as many as two thirds finding it encourages new growth."

As most men feel self-conscious about their hair loss, it’s not surprising to learn 13% of those in a relationship with someone experiencing hair loss stated their partner’s confidence decreased which negatively affected their relationship. 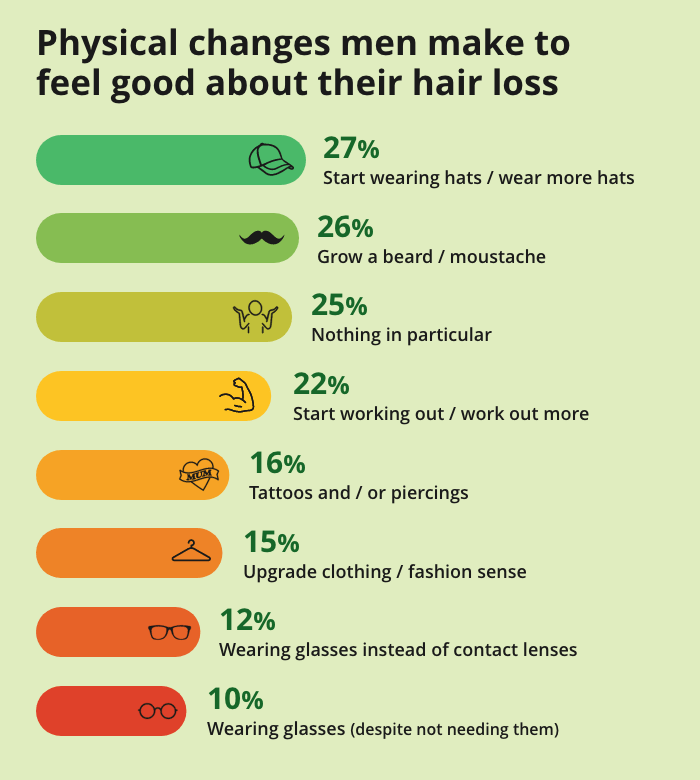 The most common change men make when they start experiencing hair loss is to begin wearing hats or wearing them more often. More than a quarter (27%) state this as the biggest change they made.

Growing a beard or a moustache follows as the second most common change men make when they start experiencing hair loss. And one in four say they feel confident enough in their skin to change nothing about themselves since they started losing their hair.

Younger generations are more likely to change their body’s physical appearance to try to feel more confident about their hair loss. With 35% of those aged 16-24 stating they started working out along with 30% of those aged 25-34.

Those aged 16-24 are also more likely to change their body’s physical appearance by taking it up a level with more permanent changes. 28% admit to getting tattoos and piercings to distract from their hair loss.

Hair loss and confidence: how is hair loss affecting the dating scene and relationships

Feeling self-conscious about hair loss has had negative implications on some men’s dating lives with over a third (34%) choosing to wear a hat on a real-life date or dating apps to disguise their hair loss. And as many as 15% said they’d cancelled a date due to feeling nervous about revealing their hair loss.

This correlates to over three quarters (78%) of respondents who are attracted to men stating they have been ‘hatfished’ before or know somebody who has. ‘Hatfishing’ is when someone hides their bald head or bald spot underneath a hat from their love interests.

As a result of this ‘hatfishing’ culture,72% now assume that if a man is wearing a hat in a dating profile picture, he is most likely to be bald. 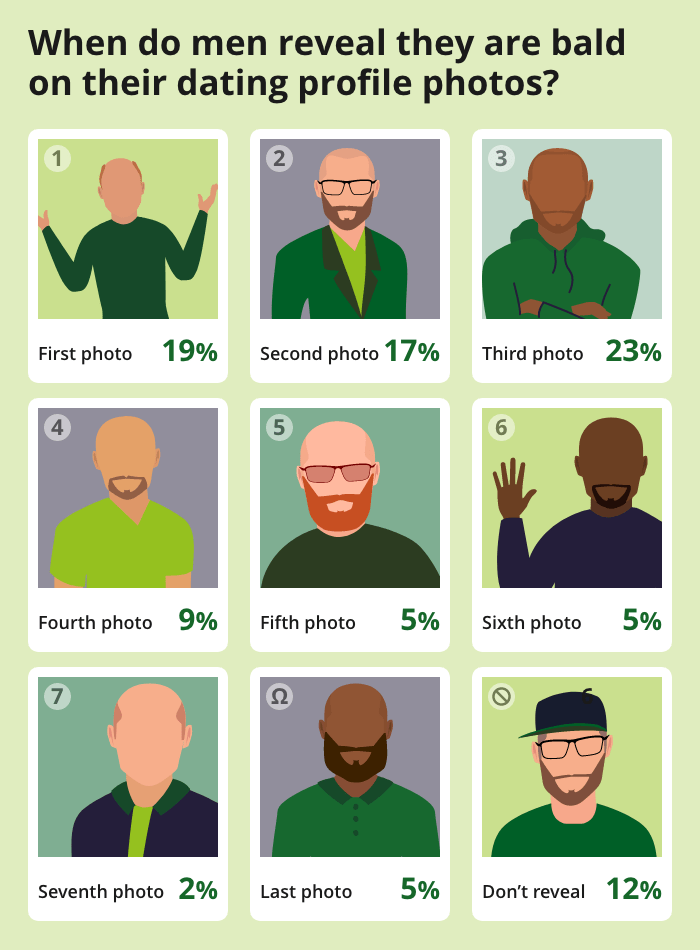 It’s easy to understand why men feel like they have to disguise their hair loss with a hat as our findings reveal 13% have had someone cancel a date after finding out they are bald. And as many as 11% have had someone use their baldness as a reason not to go on a second date with them. A further 11% have also experienced someone unmatch with them on a dating app after they revealed they were bald.

Those aged 16-24 are the most likely to have had a negative experience within the dating scene. Over a fifth of 16-24 year olds have had someone use their baldness as a reason not to go on a second date with them as well as have someone cancel a date with them after finding out they are bald.

When it comes to ‘hatfishing’ and dating, it seems honesty is the best policy. Almost half (48%) of respondents attracted to men want them to ditch the hats as they’d prefer them to embrace it and shave their hair all off. This is in comparison to just 6% who want them to disguise their hair loss with a hat.

Women dating men are twice as likely to prefer it when a man embraces his hair loss and shaves his hair off than men who are dating men.

Censuswide conducted a survey on behalf of Lloyds Pharmacy Online Doctor and surveyed 501 British bald men who use dating apps, and 1002 British people who use dating apps/websites and are attracted to men. They were then given six questions of multiple choice to describe how they feel about being bald, their partner being bald, and actions taken based on hair loss.