Living with a nut allergy 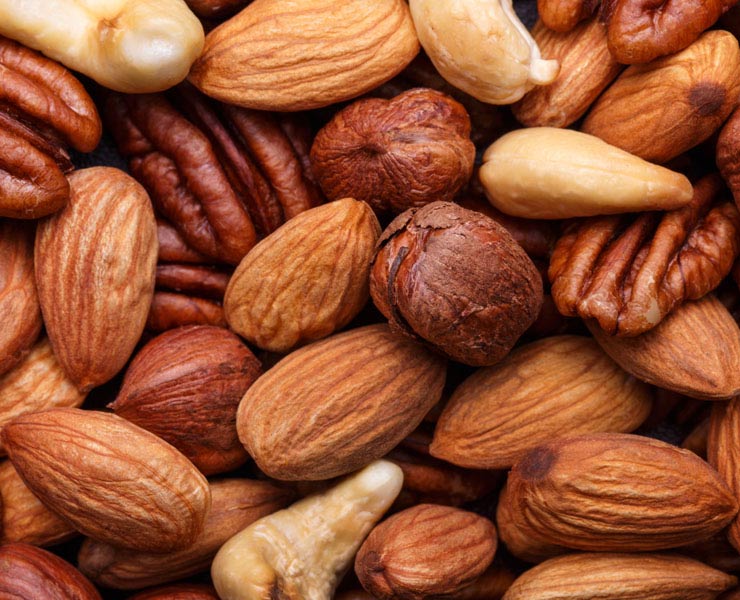 What is a nut allergy?

Nuts come in all shapes and sizes and are the most common food allergy. Nuts that people are allergic to include almonds, hazelnuts, walnuts, pecans, Brazil nuts, pistachios, and even peanuts, which strictly speaking aren’t actually a nut (they are classed as a legume, from the same food group as peas and lentils).

The allergies tend to be split between peanuts and tree nuts, but since the signs and symptoms are almost identical, we’ll just be looking at nut allergies in general.

When a nut allergy sufferer comes into contact with nuts – through eating them, getting nut oils on their skin, or even just inhaling their dust – the body mistakes the nut as a threat. It responds by launching a defence against the allergen, in the form of a substance called histamine. When this is released into the body it can cause symptoms ranging from a red skin rash to swollen eyes, lips, hands and feet.

Some people even go into anaphylactic shock: this can lead to lightheadedness or fainting, changes in heart rate and panic, airways narrowing, stomach pain with nausea and vomiting, and even collapsing or unconsciousness.

Four ways to manage your allergy

As a nut allergy can cause a life-threatening anaphylactic shock, being prepared is hugely important. If you have a history of anaphylactic shock, you should carry at least two EpiPens at all times. Make sure your friends and family know how and when to use them. It’s also worth wearing an allergy bracelet, which will let strangers know what to do.

While your friends and family will probably know about the allergy, it’s also worth mentioning it to work colleagues. The same applies to ordering food from restaurants or a food outlet. Even if menus specify that a dish doesn’t contain nuts, it might have been cooked in environments handling nuts and so it may contain traces of the allergen.

While nuts can appear in cuisines from all around the world, there are some types of food that use nuts more than others. Chinese, Mexican and Thai dishes often include nuts, sometimes as a garnish which is not mentioned on the menu. Nuts can also be found in things like pesto, salad dressings, baked goods, pancakes, and in vegetarian meat substitutes.

Desensitisation treatments are available. The entail giving you a tiny amount of the allergen to help you build up an immunity to it. This has been proven to work especially well in children. A study published in medical journal The Lancet found that after six months of oral immunotherapy, where the patients eats a small dose, up to 91% of children aged 7 to 16 could safely ingest about five peanuts a day. Any treatment like this must only be done under close medical supervision. Speak to your GP about your options.

Mar 10, 2015Dr Anup Jethwa
Don’t let sugar get the best of youThe bald truth – separating the myths from the facts about baldness