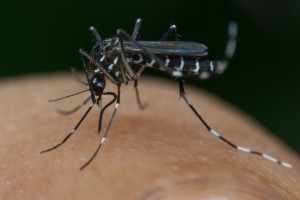 The 2016 Olympics are underway in Brazil’s Rio de Janeiro, and with Andy Murray, Jessica Ennis and Usain Bolt all set to make appearances, there’s plenty to look forward to. Unfortunately, recent coverage of the Rio Olympics has been overshadowed by fears over Zika – just recently, golfer Rory McIlroy pulled out of the Olympics because of his concerns about the virus.

In February we published a guide to Zika, but with the Olympics upon us, we’ve looked into the situation in Brazil in order to give guidance to any Brits who might be attending the Rio games.

Zika is a virus spread by mosquitoes that can cause a mild flu-like illness. However, pregnant women in may lead to birth defects. Scientists also suspect that Zika can rarely lead to Guillain-Barré syndrome, a disease affecting the nervous system.

It is thought that you can catch Zika by having unprotected sex, and as well it is recommended that pregnant woman practise safe sex with condoms if they think their partner may be infected, as well as protect themselves from insect bites.

What is the current Zika situation in Brazil?

Brazil is currently one of the countries experiencing an outbreak of Zika. However, a recent report from the Pan American Health Organization shows that the number of suspected and confirmed cases has been steadily decreasing since the end of February. Unfortunately, according to this news report, it seems that a large proportion of cases are occurring in Rio, where the Olympics are based.

In response to the situation, the Centers for Disease Control and Prevention have issued a Level 2 Alert to travellers visiting Brazil. That means visitors should practise “enhanced precautions”.

Is it safe to travel to Rio?

Precautions should be taken by all travelling to Rio or Brazil. To protect yourself against insect bites, it is advised that you:

However, if you are pregnant woman it is strongly recommended that you do not go. If you have a male partner who goes to the Olympics, it is also advised that you use condoms during sex for the remainder of your pregnancy.

If you are a woman thinking about becoming pregnant in the near future, you should speak to a doctor before travelling. Whilst in Brazil, you should use contraception to avoid getting pregnant.

What precautions should be taken whilst in Rio?

It is normally recommended that travellers visiting a country with a health warning meet with a doctor or nurse 8 weeks before their trip. You are less likely to be at risk as long as you:

You can avoid getting bitten by wearing mosquito repellent that contains DEET. This chemical is very effective in deterring mosquitoes; the higher the proportion of DEET in the repellent, the better protected you will be. You should also wear light, loose clothing that covers your arms and legs.

The mosquitoes that spread Zika are most active during the day, however you should take precautions at night as well. If possible, sleep under a mosquito net impregnated with repellent, and choose accommodation that has screens on the doors and windows.

Read more about how to avoid mosquito bites here, in an article written one of our doctors.

Before leaving for Rio, it’s also strongly recommended that you buy a travel insurance package that covers you for medical procedures abroad.

What are the symptoms of Zika?

If you get bitten by a mosquito carrying Zika while in Rio, there is a good chance that you will not experience any symptoms. If you do experience symptoms, however, you may get some of the following symptoms:

For most people, the symptoms of Zika are mild and pass within a week. You shouldn’t need to see a doctor, unless you are pregnant, you feel very unwell, or your symptoms don’t pass on their own.

If you feel very unwell whilst in Rio, you should seek medical assistance; the CDC provides some helpful Portuguese phrases for getting to a doctor here.

Are there other diseases to be aware of whilst in Rio?

Malaria is very low-risk in Rio de Janeiro, so you will not require malaria tablets.  However you may be at risk of contracting dengue, a fever which is spread by mosquitoes and more common in urban areas. Another mosquito-borne disease to be aware of is chikungunya. Zika, dengue and chikungunya are all spread by the same kind of mosquito, which is why it’s so important to protect yourself against getting bitten.

To find out more about Zika, consult the NHS, the World Health Organization or the CDC.

Lastly, if you’d like to speak to a doctor but you don’t have time to book an appointment before leaving for Rio, you might consider using Online Doctor’s “Talk to a Private GP” service. Click here to find out more.