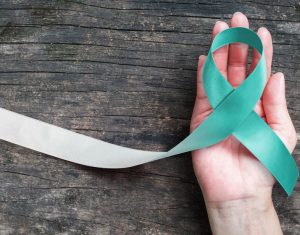 Cervical cancer in the UK

Half of all women will develop some form of cancer in their lifetime. But at least 3,000 cancer diagnoses in the UK could be avoided each year, including cervical cancer.

Cervical cancer is the most common cancer affecting women under 35, but 50% of cervical cancer deaths occurring in women over 65. It is a health concern for women of all ages.

However, one million women failed to attend smear tests between 2013 and 2014 alone. Seeing it as unnecessary or embarrassing, those who miss a smear test are at risk of the early warnings for this deadly disease not being picked up.

Cervical cancer is usually caused by the human papillomavirus (HPV), which is spread through both intimate sexual contact and from mother to baby immediately after birth.

HPV comes in over 100 different forms which affect the body in different ways.

It’s estimated that 80% of the world’s population will contract a form of HPV at least once in their life – but most people don’t realise that they have it.

How can I protect myself against cervical cancer?

Cervical cancer is a preventable disease. Gardasil 9 is a vaccine that works by giving immunity against the most harmful types of HPV.

As of 2008, the government’s HPV immunisation programme was set up in schools for girls aged between 12 and 18. Those who aren’t eligible for HPV vaccines on the NHS (including men) can get them through the LloydsPharmacy Online Doctor HPV Vaccination Service.

Screening allows any abnormal cell changes to be detected before they can develop into cancer.

As part of the National Cervical Screening Programme, women aged 25 – 64 who are registered with the NHS will receive an invitation via the post for a cervical smear test every 3 to 5 years.

Even if you have had the HPV vaccination, you should still have regular smear tests to ensure you are protected against other cancerous forms of HPV.

An estimated 4,500 lives per year could be saved by cervical screening. It’s a quick and routine test performed by an experienced nurse in total privacy. You can take a friend with you if you want to – don’t let embarrassment stand between you and good health.

Look out for symptoms and changes

Early detection and treatment can prevent cervical cancer developing in around 75% of cases. Symptoms you can watch out for include:

If you experience any of these symptoms, see your GP as soon as possible.

You can find answers to common questions about the HPV vaccine – but here are a few HPV vaccine quick facts.

Not covered on the NHS? Men and women of any age, overseas students and employees on work placement can use the LloydsPharmacy Online Doctor HPV Vaccination Service to get vaccinated.